“I did my PhD in IIT from 2007 to 2011 working with Giorgio Metta in the iCub Team (at that time, we were all part of the RBCS laboratory) and with Francesco Nori. I mainly focused on two topics: first, model-predictive optimal control of the robot arm with neural networks; second, the estimation of the whole-body dynamics of the robot which would allow it to estimate interaction forces and joint torques, understanding for example when someone touches it. I kept collaborating with Francesco, as well as with Daniele Pucci, Head of Artificial and Mechanical Intelligence at IIT, on two European projects: CoDyCo during my Postdoc in France and Germany, and then Andy, which we wrote together when I obtained my permanent position in Inria. The projects deal with the interaction between the robot and the environment and the robot and human beings.
Today I still collaborate with IIT, specifically with Lorenzo Natale on Heap, which mainly focuses on object manipulation in difficult situations and with Agnieszka Wykowska as we are both Editors in Chief of the International Journal of Social Robotics. Today I’m a Tenured Researcher at INRIA, which is the French national research institute for digital science and technology. On top of all that, I teach Human behavioral analysis at the University of Lorraine. I can quite easily tell that studying robots brought me closer to understanding human beings somehow.” 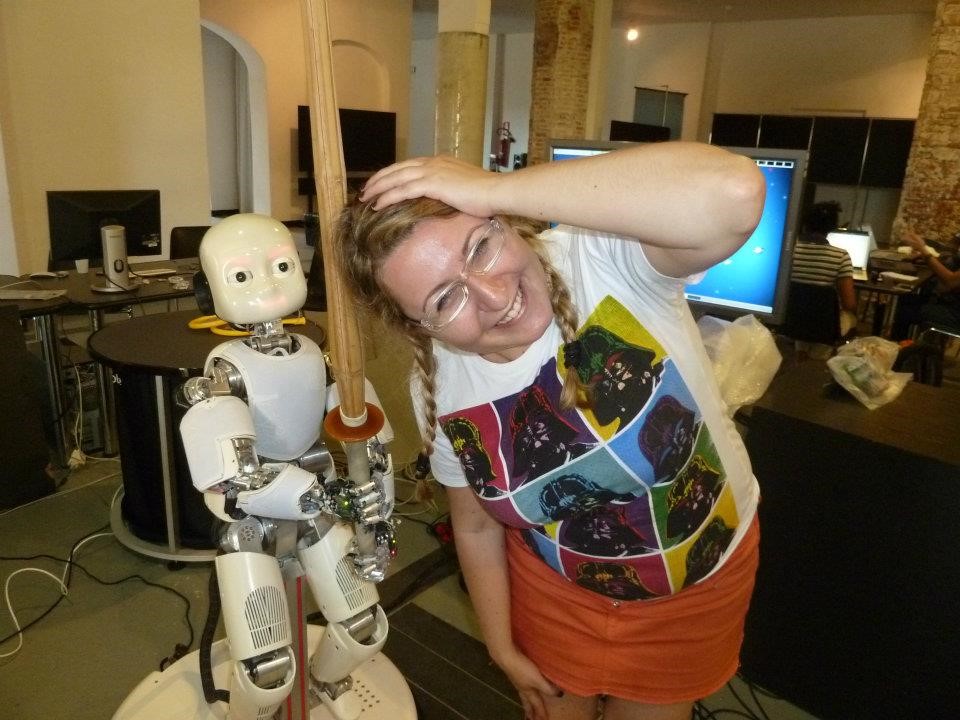 I know you received an unexpected request connected to the COVID pandemic emergency last year.

“The Nancy Hospital contacted me, through a surgeon I know, because they were facing a very difficult situation and they thought we might help somehow.

The COVID pandemic caused many people to end up in the intensive care unit, where under normal conditions people stay for a few days for postoperative controls and are rarely held for as long as COVID patients are, which could be up to 5-6 weeks.

The issue they were struggling with was the fact that these people, who were often intubated and, therefore, connected to several tubes and sensors, needed to be moved several times a day to increase oxygenation through an operation called “prone positioning”. However, moving a curarized body with the added complication of tubes attached, requires a team of up to 5 – 10 doctors in order to make sure all goes smoothly.

It was a known procedure. However, during “normal” times they only used to do this a few times per month, depending on the number of people in the unit. Now they had to do it up to 20 times a day or more.

It is a physical demanding procedure and so the hospital first thought of robots who could do the job instead of doctors. This is however not feasible for many reasons.”

How did you come up with the idea of exoskeletons?

“While discussing the issue with this surgeon, she mentioned that given the fact that the procedure was extremely physical demanding and time consuming, they had set up a sort of “prone-positioning team” which would take 2-3 hours a day to only do that operation using a sort of “industrial assembly line” method.

And that definition – Industrial assembly line – made me immediately think of exoskeletons that are exactly used in industrial repetitive procedure. And so we began the first pilot testing with existing commercial exoskeletons, typically used in manufacturing and logistics for back support, after selecting the ones with the requirements we deemed most fitting.”

This, Serena explains to me, was pivotal as exoskeletons were never used for such a task and, therefore, it was paramount to understand how this technology would affect the medical gesture. In the medical field, before introducing a new device, it is critical to make sure it does not  change the “medical gesture” or lower its standard – because if it does, the hospital cannot accept the introduction of the new technology.

The Nancy Hospital got two exoskeletons in April 2020. Then Serena’s team bought other two latest model during the summer and continued with a deeper analysis, aimed to quantify the physiological and biomechanical contribution given by this support.

“It was a good example of all the problems related to introducing a new technology into a field. Also, it was an interesting exchange with the hospital and something I know I could face thanks to my previous experience with exoskeletons in the AnDy project.”

Lastly, what is a good memory of IIT you feel like sharing?

“I loved ICub Summer Schools. And people. People especially. My best memories are connected to people, I wouldn’t even know what or who specifically to mention, but definitely people are what I mostly treasure of my experience in IIT.

Another thing I loved was the multidisciplinarity that both Giorgio Metta and Giulio Sandini imprinted on us, as part of the training of PhD students. There were presentations, seminars where roboticists participated together with neuroscientists and so on. This open-mindedness is still part of my way of looking at what I do from many angles.

And then Summer Schools. Every year, even while in France, I used to match the beginning of my holidays here back home with the beginning of the Summer Schools.
We used to organise them in Sestri Levante, where we would bring two or three Icubs and we would just help other researchers coming from all over Europe to test the robot. There were tutorials and courses and it was just an amazing opportunity to spread ideas and know people.”

Thanks to her extensive experience with Icub, Serena is a sort of iCub ambassador around Europe. In fact, knowing all the setups for the IIT Icub lab since she helped build it when IIT was still in an “embryonic state”, she then replicated the same structure for the two iCubs in Paris (France), then in Darmstadt (Germany) and Nancy (France).