The MEMEX travelling exhibition will be in Lisbon, Paris, Genoa and Barcelona. Open to the public and free of charge

The MEMEX travelling exhibition will be a place where to discover and experience AI for social inclusion. It will be present in 4 European cities:  Lisbon (19-29 September), Paris (5-13 October), Genoa (20 October – 1 November), and Barcelona (9 November – 23 December). The exhibition will show the results obtained by the EU-funded project MEMEX, aiming at promoting social cohesion through intelligent and interactive tools, such as MEMEX’s augmented reality app installed on mobile phones. The exhibition entrance will be free of charge in all locations and open to the public.

The MEMEX project was launched in 2019 to develop artificial intelligence and augmented reality technologies able to help the social inclusion of people who risk being marginalized, by promoting their personal stories linked to cultural heritage via digital tools. The project’s main achievement is represented by a new mobile app prototype that has been tested in Paris’ most vulnerable residents of the 19th district, in Barcelona by migrant women, and in Lisbon by the first and second-generation migrants. Coordinated by the Italian Institute of Technology (Genoa, Italy), the project has been funded by the European Union under the programme “Horizon 2020” with almost 4 million euros for 3 years and involved research institutes, NGOs and companies in Italy, Spain, Portugal, Ireland, France and Belgium.

In Lisbon, Barcelona and Paris participants were engaged by the MEMEX project’s partners in a digital storytelling journey to reinforce inclusion and cultural participation. Participants visited local heritage through guided tours, reflected on these places, then identified the topics and wrote their stories, by also co-creating audio-visual stories. Their participation was key to re-interpreting existing heritage and co-creating plural meanings of it.

Visitors will be hooked on an audio-visual journey introducing them to the stories created by the community participants on the cultural heritage of their cities and their relationship to it. The exhibition also brings the audience to the “behind the scenes” of the MEMEX project: creation and management of pilot activities, digital storytelling methodology with the audience and app prototype co-creation.

“I discovered everything I had been so intrigued about for years in Rosa Parks, and that I saw from my balcony. Since then it became my regular walk” – Quote from a Paris storyteller.

“The migrant is the one who seeks to live fully and to do so, well worth a good dose of curiosity” – Quote from a Barcelona storyteller.

“And lost in the landscape, in a mesh of electric wires, going to the Rua do Alecrim, a statue. What statue was it? Must have been someone important she thought” – Quote from Lisbon storyteller. 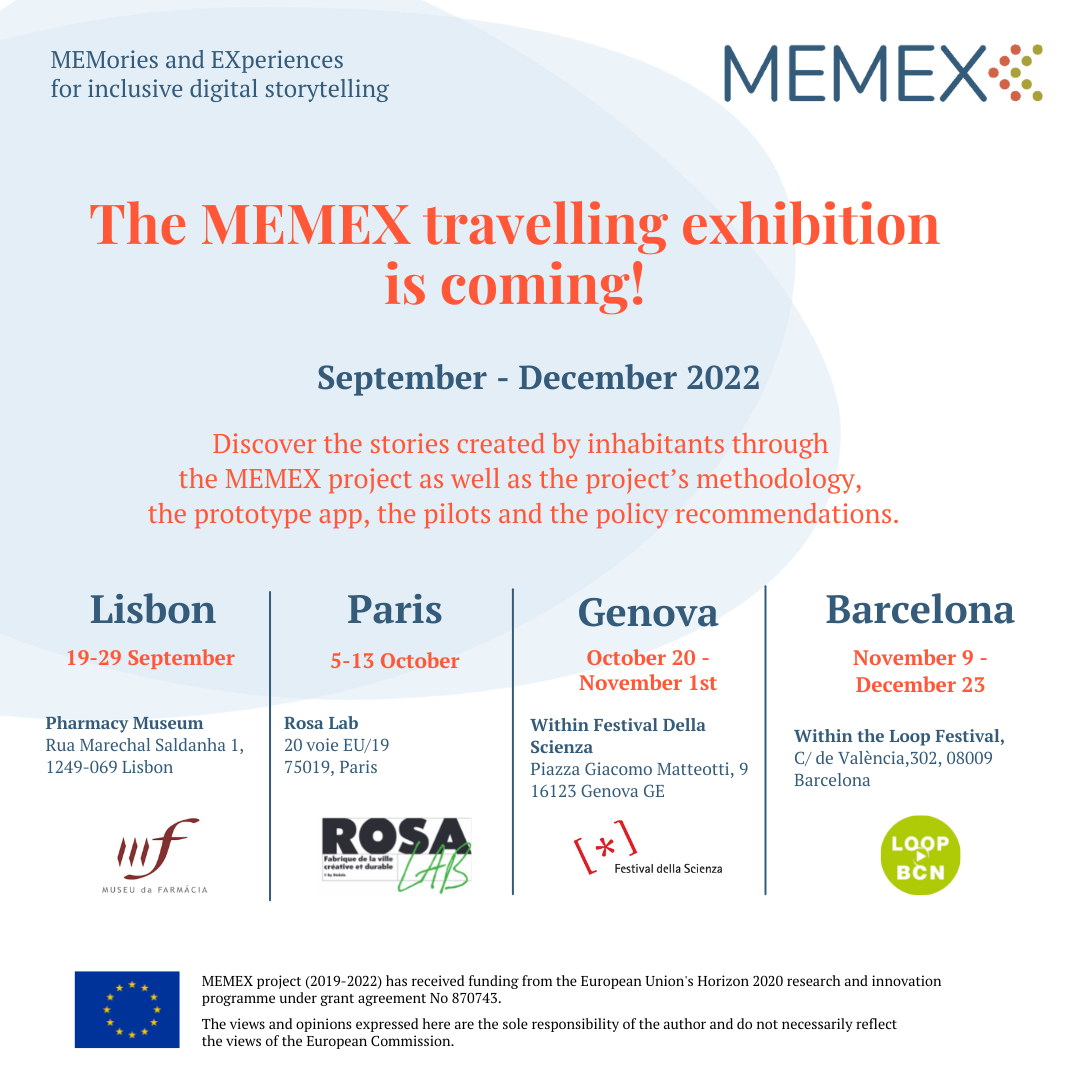