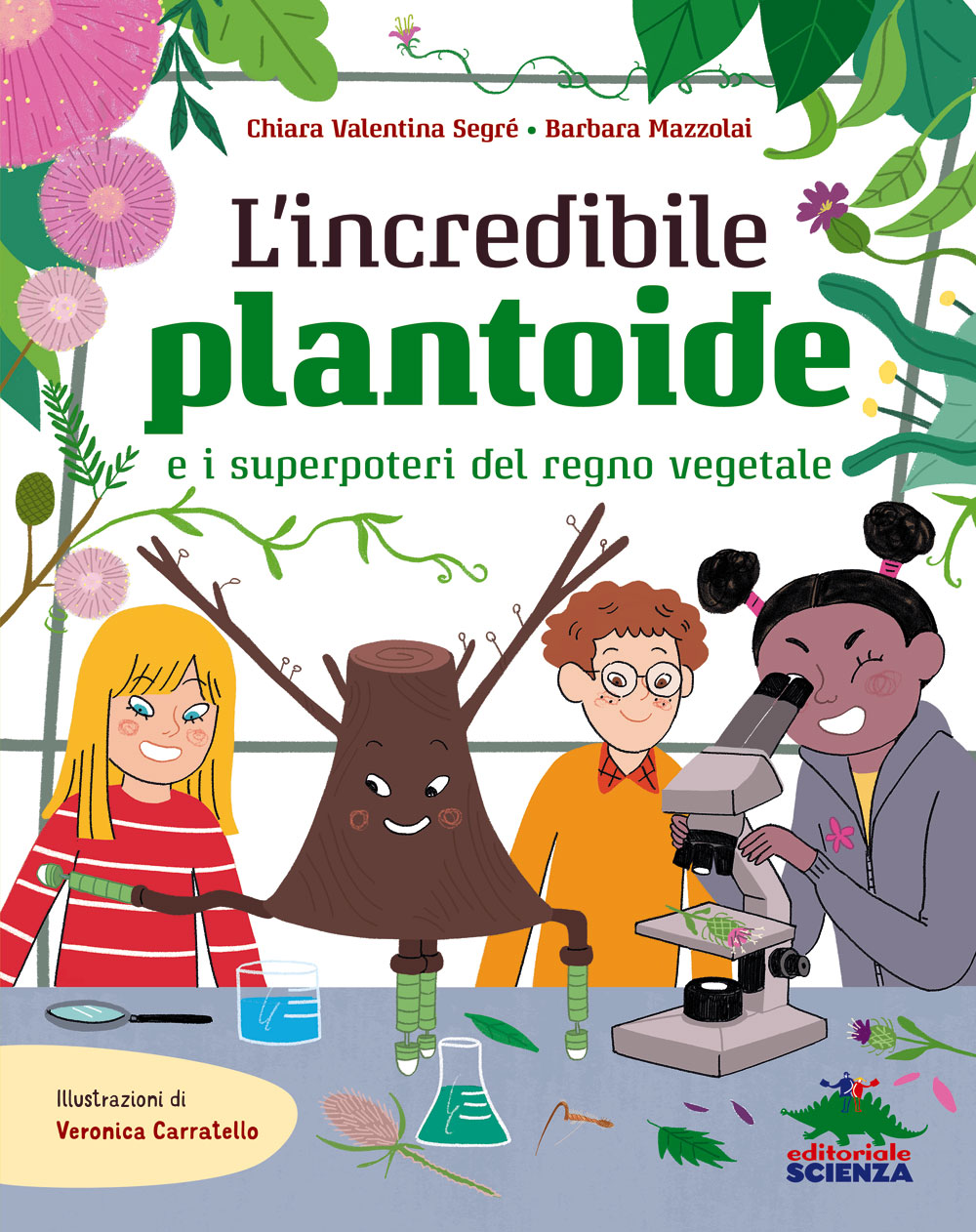 The book “L’incredibile Plantoide e i superpoteri del regno vegetale” (The Incredible Plantoid and the Superpowers of the Vegetable Kingdom) saw the light in several locations. Genoa, Pisa, Milan, Padua and Trieste are, in fact, the cities implicated in its development before it appeared in bookshops all over Italy. Genoa is the city that hosts the IIT laboratories directed by Barbara Mazzolai, the book’s co-author, and the place where the book is set. Pisa represents part of Mazzolai’s scientific career. After studying at the Scuola Superiore Sant’Anna, she became coordinator of the IIT centre in Pisa and invented the world’s first plant robot, the Plantoid, which in the story plays the role of an “incredible” mentor. Milan is home to Chiara Valentina Segré, biologist and writer, the book’s co-author. Padua is home to the world’s oldest university botanical garden, which for its 800th anniversary promoted the creation of an editorial series on themes linked to biodiversity, and the book is part of that series. Lastly, Trieste is the location of the publishing house Editoriale Scienza (Science Publishing), which arranged the book’s production, commissioning its illustrations from the highly talented Veronica Carratello.

The principal personalities in the story are two young girls, Barbara and Samira, and their friend Vittorio, who one day decide to venture into a building known as “The Flower Vase” because of its shape; the place, set amidst the hills of Tuscany, turns out to be the Istituto Italiano di Tecnologia (Italian Institute of Technology). Once inside, the three youths meet Mr Plantoid, an expert in plants and robotics, who takes them on a tour during which they discover shy plants, flowers in iridescent colours, networks of underground plants, climbing robotic plants, aquatic plants capable of supporting a person’s weight and many other surprising facts and practical applications from the plant world.

We contacted Chiara Valentina Segré, asking her to tell us about the book’s background, and to offer her reflections on the value of science narrative for children.

Chiara, Barbara Mazzolai and yourself are both biologists by training, but you work in two different professions, you are a populariser and writer, she is a researcher; two professions that enabled you to meet. How did the idea of writing a book together emerge?

The idea came through Telmo Pievani, pro-rector at the University of Padua and curator of the publishing series commissioned for the anniversary of the Botanical Garden of Padua, produced by the publishing house Editoriale Scienza. The idea was to write a book on plants that would talk about the future, involving Barbara Mazzolai and narrating her research. However, they needed an expert in children’s literature who could plan and write the book, so I immediately accepted the proposal. The book’s preparation began when my youngest daughter was born; Barbara suggested scientific articles, books and materials to study, and I read them between breastfeeding sessions. We often spoke by video call, fitting appointments into Barbara’s packed schedule. It took us about six months to write the content. I initially thought about the outline and the format, alternating an imaginative, narrative part with other material closer to themes of scientific communication; she supervised the accuracy of the scientific content, with suggestions on what could be added in certain passages.

In your story, one of the characters is a little girl named Barbara and she is seen trying to fly a small drone. She is blonde and blue-eyed. So she reminds us precisely of Barbara Mazzolai. Why this choice?

That was my decision. When I read one of Barbara’s books, La Natura Geniale (The Genius of Nature), I was struck by the description of herself as a child, who was not thinking at all about becoming an expert in robotics, but was already very keen on biology. So I wanted to develop the female personality in the story, basing her closely on the figure of Barbara; in addition, I liked the idea of creating a link between my fictional character and a real person, a researcher who has actually done some very important things, to show that the story told in the book is not all fiction. People of that sort really do exist!

Could we also say that the real Barbara has passed the baton to the younger, imaginary Barbara in the book, and perhaps in the real world, and so she will probably become a researcher in the future?

Certainly there is an implicit message of legacy for the new generations. An outlook towards the future. In choosing the characters, I wanted readers to be able to identify with an image, and that this represents the real world in which they live. For the co-protagonist, Samira, I deliberately asked the illustrator to depict her with physical characteristics that indicate that she belongs to a different ethnic group with respect to Barbara’s, because it is important that all readers, regardless of their origin, can see themselves as part of the story.

You have written a book dedicated to communicating science with today’s children in mind, the younger generation. In your opinion, compared to our generation, to what degree is science present in their education?

Certainly today there is much more available. Instagram and TikTok are full of informative content accessible to all, some of good quality, some truly excellent; many popularisers are present on social media, there are more opportunities, internships, competitions and science festivals, science museums are more active in involving schools, and schools themselves dedicate more attention to this field. But I am not sure that this content reaches everyone. Its abundance could give us an erroneous impression of diffuse knowledge. I believe that there are still some groups in society which, as a result of their social and economic background, outside the world of schooling – and perhaps they are not even in school – do not have the opportunity to access this knowledge. I hope that, by means of public libraries, this book could become a more accessible tool and implement the promotion of STEM culture.

As a child, did Chiara dream of becoming a biologist or a writer?

I dreamed of becoming a journalist first, and then a writer. When I was eight years old I wrote my first story, I remember writing on my mum’s typewriter. At the same time, I was fascinated by science subjects. So I developed both these passions. At university, I decided to study biology, thinking that that sort of training, above all in the biomedical field, could enable me to discover cures or processes linked to diseases. Later I continued my studies with a Master in journalism and young people’s literature. Eventually these two areas of interest merged in the work that I do today, both as a science educator and as a writer.

Why do you prefer writing for younger readers?

Children always ask me that question too! Literature for young people allows you to work on more themes than literature for adults, and it gives you more freedom to approach important issues, using more styles and forms of expression. In addition, something that really interests me is the possibility of inspiring a boy or girl with one of my books, and in this way to help construct what he or she will become, even if only in a small way. It gives me a great sense of responsibility, but also strength and enthusiasm. We have all read books, when we were children or teenagers, that changed the way we looked at things, that helped determine what we would become.