The data opens up new perspectives for treating breast cancer. The research was backed by the AIRC Foundation for cancer research

The recent study disclosed by the Journal of Cell Biology (JCB), the prestigious international magazine published by the Rockefeller University Press, was authored by exclusively Italian researchers. The study identified the microRNAs necessary for the survival of cancer stem cells, which encourage the growth of breast cancer tumours and the reappearance of the tumour after treatment. The data shows that it is sufficient to block these microRNAs to make the stem cells more vulnerable to certain drugs. If the results obtained are confirmed by clinical studies, chemotherapy treatments could become even more effective in the future, improving the prognosis of patients with aggressive forms of breast cancer. 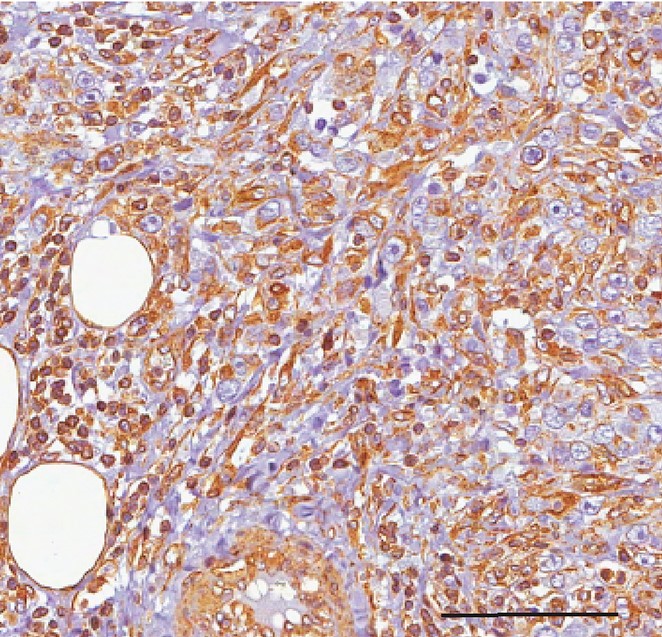 The research study was backed by the AIRC Foundation for cancer research, and it is part of the studies conducted by Francesco Nicassio, coordinator of the Center for Genomic Science (CGS) at IIT-Istituto Italiano di Tecnologia (Italian Institute of Technology) in Milan. In fact, in a previous study, Nicassio and his group had identified another microRNA, miR-34a, revealing its role in inhibiting the proliferation of cancer stem cells. Unlike the miR-146a/b microRNAs, miR-34a is not present in stem cells, but on the contrary it is expressed by the most differentiated breast cells, which therefore no longer possess stem cell characteristics. This, the latest research study, introduces additional elements furthering the understanding of cancer’s genetic components, and it opens up new possibilities for the therapeutic application of non-coding RNA – the central objective of the IIT’s “RNA-initiative” (iRNA@IIT) of which Nicassio is a member.

The study emerged from a collaboration between the IIT research group led by Francesco Nicassio and the team headed by Prof. Pier Paolo Di Fiore, Group Leader at the Istituto Europeo di Oncologia (IEO, European Institute of Oncology) and Full Professor at the State University of Milan, who for years has been studying the biology of breast stem cells.

Many tumours, including breast cancer, contain a small population of tumour stem cells, considered to be at the heart of the tumour’s development. Tumour stem cells are often resistant to radio- and chemotherapy, and so they can survive the initial treatment cycles and cause the reappearance of the tumour and metastases. For example, in breast cancer, tumours containing a relatively high number of cancer stem cells have a far less favourable prognosis when compared to those with a lower number of stem cells. Being able to target these cells can therefore be crucial for the effective treatment of breast cancer and other types of tumour.

Amongst the molecules that could play an important role in the biology of stem cells are the microRNAs, discovered over the last few decades. Notwithstanding their minimal size, these molecules control the destiny and identity of cells, regulating the levels of hundreds of longer messenger RNAs that provide the coding for proteins.

“Our objective is to identify the microRNAs necessary for the survival of cancer stem cells and that could represent potential therapeutic targets in breast cancer”, said Francesco Nicassio, coordinator of IIT’s CGS in Milan.

“We have identified two closely correlated microRNAs, miR-146a and miR-146b, present in mammary stem cells and also in breast cancer stem cells. The levels of these two microRNAs tend to be very high in the most aggressive breast cancers, which show a large number of cancer stem cells”, commented Chiara Tordonato, researcher at IEO and the University of Milan, and the first author of the study. “Our hypothesis was that the miR-146a/b microRNAs could be necessary to maintain the pool of cancer stem cells. Destroying these two microRNAs in the cancer cells obtained from patients was sufficient to reduce the ability of these cells to form new tumours”.

Nicassio and his colleagues found that the miR-146a/b microRNAs regulate hundreds of messenger RNAs, thus controlling many cell processes such as DNA replication and metabolism.

“Some molecular details still have to be determined, but our results clearly show that the reduction in the levels of miR-146a/b represents an approach that has the potential of being able to overcome certain forms of drug resistance in clinical applications, uncovering the tumour’s ‘hidden vulnerability’ which can be exploited for the development of new therapies capable of targeting cancer stem cells”, concluded Nicassio.

The elimination of the miR-146a/b microRNAs from cancer stem cells could alter these processes in ways that make the cells more vulnerable to chemotherapy. In fact, the researchers have discovered that a reduction in the levels of miR-146a/b rendered breast cancer stem cells over 20 times more sensitive to methotrexate, significantly improving the capacity of this metabolic inhibitor to limit the growth of the tumour.

(caption: Sample of a tumour from a breast cancer patient showing high levels of miR-146a and miR-146b microRNAs.)